Then Keep Me: A magical retelling of Bluebeard

He arrived in the middle of the night, banging on their door in the midst of a raging storm.

Windy gusts lashed the windows, tree branches scraping the panes. It brought her and her parents barefoot down the creaking stairs, their movements indolent from sleep. Guttering candles in iron sconces painted gold on their heavy-lidded eyes.

Her father opened the door, letting in a fury of tempest that billowed her nightgown around her legs and sprinkled raindrops on her cheeks. They clung like crystals to the cloudy curls around her head.

And there he stood: his long dark hair plastered to his skull by the torrential rains of the autumn storm, a crumpled piece of parchment with water-blotched ink on it clutched in his pale fingers.

The Assassin: A fantasy story about falling for the wrong man

She would never forget the first moment she’d seen him standing on the threshold. Straight dark hair, intent gray eyes set in a narrow, hawkish face. Lean and powerful, a thrumming energy to him as if he restrained a seething force within that he barely kept leashed. His every look penetrated the soul, bared every secret; his every touch brought with it a whisper of doom; his every movement slid through reality, elegant, graceful, and deadly. He spoke little, moved sparingly; he was still until action was necessary, quiet until words were essential.

This was the assassin who killed hundreds at the king’s behest.

The man she was to live with, spend every spare moment with.

The man who would train her to do the impossible.

About That Kiss: A sweet and funny fairy tale 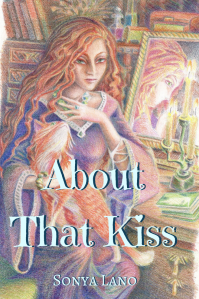 Alihandra’s Grand-mama has made this clear (along with the fact that love should be taken out like rubbish), and Alihandra is determined to overcome her half-human origins and follow this recipe for witchiness.

Unfortunately, on the one night of the year when all things ghastly hunt down witches for brides, the very human, unwitchy Quersiadel might be Alihandra’s only chance to avoid becoming a troll’s bride.

And the price for his help just might be… a kiss.

A Patchwork of Scars: A short fantasy story of love beyond trauma

In the chill, relentless rain stood a girl without a name.

Her skin was a patchwork of scars and motley bruises, her body an untold tale of torment.

But her memory played truant, an imp dancing beyond her grasp and laughing as it withheld the knowledge of how she’d come to be lying here, unconscious on the side of a road in a rain-drenched forest.

Her long gown was torn near to shreds, its tatters a pale drape across her emaciated limbs—limbs marked in the hues of torture…

Beautiful, exquisite, and without a backward glance or a shadow of sorrow to mar her flawless brow, she soars away from me.

For we, The Untouched, know no emotion, not even love or devotion to one another.

There is no reason for her to look back.

I nearly take wing after her, but the Crimson Tainted grabs my wrist and drags me back to the gory battlefield. I catch a glimpse of my wings. Already tinged with ruby from the blood that I’ve shed.

“Our bargain,” he reminds me, and lowers his mouth to mine.

Toxin: A short fantasy of love beyond betrayal

You betrayed me into the hands of the enemy, Cezelia.

Yes, Drayven… I did. But you betrayed me first.

How? What did I do that you stand there now and watch me forced to bow at their mercy? I know you’re watching…

I can’t help but watch, because even now, you are beautiful.
Surrounded by shadows in an alleyway strewn with trash, you arch back on your knees, bathed in the light of their torches. The radiance from those flames illuminates the tattoos that cover your skin. The ink forms chains around your neck and coils and twines down your arms in shapes of dragons, weapons and calligraphy that disappear beneath the waistline of your pants.
Torchlight gleams on your hair. In the glow, its strands are the color of bruises.

The Greatest Heroes: An unlikely heroine & a cat with goggles

“Don’t stand on your hind legs – people are starting to stare.”

I twitched back my skirt and stepped out of the way of two navy men looking ready to bowl over anything in their way. Fortunately, neither glanced in our direction.

I peered down my nose at Chesterdown. “You’re a cat wearing goggles and walking on its hind legs; of course someone’s going to stare! And we can’t afford the attention. Not when we’re lying low hiding from The Wardeness.”

You can also read this on my website here.

The labyrinth sprawls like a beautiful trap in front of a fairy-tale chateau. Clouds obscure the moon above it while a young woman flees through the hedges.

He’s following her, listening, pinpointing her position. His footfalls pad into the night, steady, bringing him ever closer.
His voice – that beloved voice! that treacherous voice! – drifts through the hedge.

But she can’t. She has to find a way out.

Or she will never leave here alive.

Before the mutation, I was only unloved. I lived in a spacious mansion with a father who never looked me in the face, and in secret I drew Lunar Adurian, the scarred guy always watching me.

The guy I hoped was unloved, too. I wanted him, at least, to understand.

Then the mutation hit us all.

Now I’m reviled by my father and stuck with Lunar, a guy who reeks of heartache and wants to hurt me. He hates what I am.

But he also awakens my sleepy soul, taking what was unloved and drizzling it with honeyed hope. He wants me to love him even as he wants me to hurt like him. It’s a constant push and pull, on a balance we’re both afraid to tip.

But maybe there’s always a little self-destruction in love.