Someone Else, Please Control Me 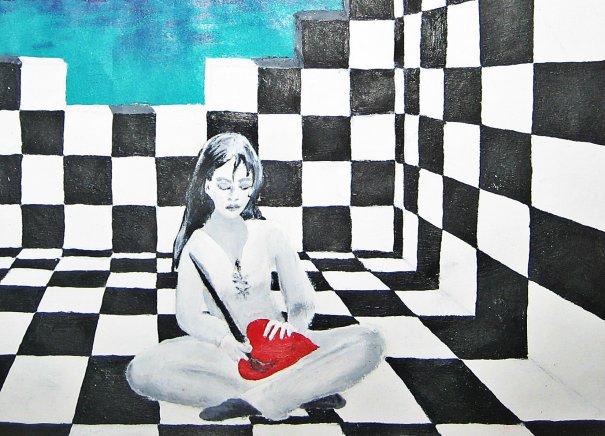 I was on the verge of a panic attack. I hadn’t been able to find the door of the club The Rabbit Hole where I was supposed to meet my friends. I froze and stared off into space while standing at the edge of the street. Passersby ambled along as if I didn’t exist; cars zoomed past in streaks of light; galaxies whirled overhead. I was alone in centered chaos, like every human ever.

I finally called my friend and asked her to come get me.

She emerged from the passageway where I’d already looked for the club entrance, then led me back in and opened a door in what I could’ve sworn was a blank wall when I’d been there moments before.

“It’s The Rabbit Hole,” she said. “It’s perfectly possible that it vanishes every now and then.”

She bought me a blueberry drink and explained the significance of too-long fingernails on women. I danced with a guy I know but who’s the mysterious type who probably doesn’t want people to know what he was doing; we danced in the light of a green lantern while sci-fi-type worlds spiraled in grids and cylinders rotating on the wall. I felt as though I were on another planet. Maybe I was another person, in another dimension. Manipulating someone else’s body on a black-and-white checkered floor. I kept my red gloves on.

He left the country this morning while I had my hot water turned off (again).

This morning I opened my notebook and found something I’d written at some point during the night, the ramblings of a person dubious of her own ability to live her life. I transcribed the scribbling pretty much word for word:

Someone Else, Please Control Me

Take this fear-ridden mind and help it dare without qualm. Take this anxiety-ridden body and make it act without inhibition. Make it kiss and dance and laugh without terror of the next moment. Take this cramped soul and help it blossom without cowardice.

Those who don’t know crippling fear could rule my body better, those who don’t overthink the consequences of the next decision. Someone who knows how to take a puppet and make it live. Steal its nightmares and gift it dreams. Someone who could slumber under a midnight fountaining with stars and appreciate the beauty of living rather than mourn things she hasn’t done.

There are no war-torn lands around me, but still my human mind seeks fear. I stand in the subway and gaze into the dark eyes of my reflection and think that someone else might drive this husk better, might make it live. I don’t know. Maybe there aren’t words for this, only emotions that can’t be expressed through paltry vocabulary.

I don’t want anyone taking my body, because I have plans for it. Let the circles under my eyes deepen. Let the madness in my mental whirlpool fester. Let the wild heart beat like an untamed savanna where the insane soul roams.

All of this is frickin’ crap.

The last line is the best one (which I edited because it wasn’t ‘frickin” that I wrote), but the sentiment of the rest was real. The feeling I sometimes get that if somebody else controlled my body, they could probably make it live so much better. That I’m incompetent and sometimes incapable of enjoying it.

But then, I like having my body. Even my midnight-rambling mind recognized that.

And when I stop to think, I realize I only get that feeling because I’m not doing the things society seems to think I should: going out, being social, having ‘fun’. Instead, I’m wallowing away hunched over a keyboard, my heart atrophying and my mouth dehydrating, writing books probably no one besides my friends will ever read.

But you know what?

I have stories to tell. Universes to explore. Lovers to set free.

Free to live, and live vividly.

On another note, I found some old paintings of mine. Ha! 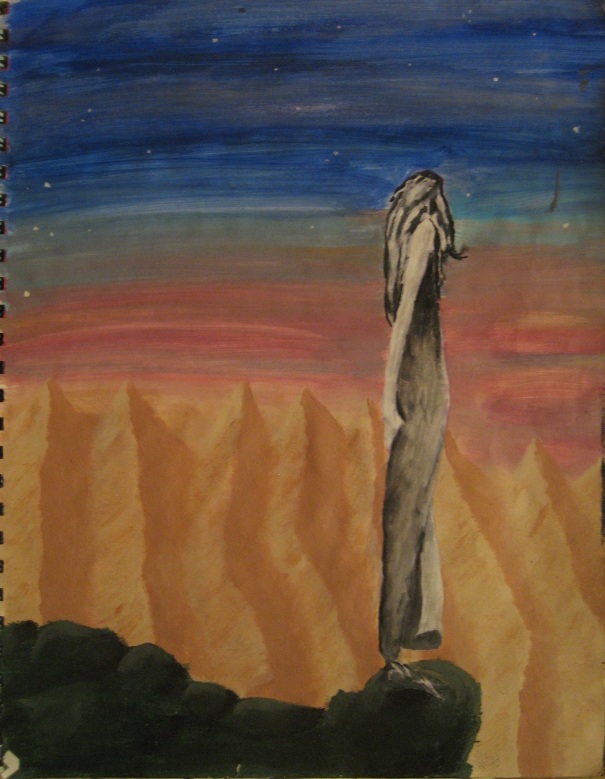 Look at this sad face!

I gave up painting and drawing for my writing. I don’t regret it.

If anyone’s read this far, I feel like I should reward you. Anyone want to read the first six chapters of I, Ruin? Or is that a punishment? 😀 Write me at sonyalakadosch @ yahoo.com or gmail.com if you’re interested.

As always, if you like my writing, check out my books 🙂 I write sci-fi and fantasy love stories where the characters go through crap but always stand by one another (when it matters). They don’t have idiotic misunderstandings, they communicate with each other like healthy humans, they stand united against the world, and the guys are actually discerning enough not to want to stick their schtick in every woman that walks past. They know what they want and don’t waste time on what they don’t.

I also have a mailing list you can sign up for to get info on new releases (even though I’ve sent out one newsletter in probably three years, but whatever!).

And I wish everyone a lovely week!