I have lapsed again! *hits head against wall* Grr, I still haven’t gotten the hang of this blogging thing. I will, though, one day, I WILL! *shakes fist in defiance against a stormy sky*

So, on to the meat of the thing then.

I went to another writers meetup today (every Friday I meet up with a group of people just to write) and I can’t say how much I love it! Actually I can and I just did so I just contradicted myself. Argh! Take note of another thing a writer shall not do.

So, to sum up and gush some more, the writers meetup is a fantastic end to the week, and so productive! Especially since so much of this week has been UNproductive…although it started off well.

Well, ‘started off well’ meaning I visited one of my writer friends on Monday, read the prologue of her book, and at its end I demonstrated to her how a demon would speak in a voice like the chatter of teeth – quite a fascinating challenge; I’d recommend trying it if you believe your mouth up to the acrobatics of it – and then I was assaulted by a pillow for my efforts.

Assaulted by a pillow, yes.

Yes, be ashamed, my writer friend, you know who you are! 😛 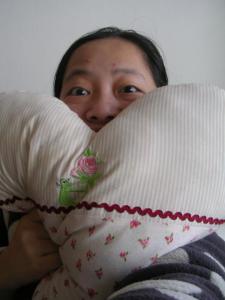 Of course, being the insane writer I am, I laughed maniacally and defiantly throughout the entire grueling pillow-pummeling perpetrated upon my person.

Fortunately she fed me and all was forgiven.

So, what happened after the pillow fight?

I came home, cleaned the cat litter…and made a gruesome discovery.

One of my cats has become a Collector. Yes, a collector – you know the type. Someone who collects something (most likely something grisly).

Tucked behind the litter boxes was a pile of socks, stolen and squirreled away – actually shouldn’t that be ‘catted away’? – but I digress.  Not only were the majority of them NOT my socks, but they were MOLDY socks.

Erm…moldy socks actually exist? I thought they were a myth created by writers to add a certain element of the grotesque to their stories.

And in amongst them was a single missing sock of mine, with suspect yellow stains on it. The Collector had apparently displayed his or her contempt of my litter-cleaning habits (or rather, lack thereof). Aaah, thou cats that let an indignant spleen control your actions!

The sock collection has since been tossed upon the laundry pile in hopes that I will soon have enough money to buy laundry detergent before the Cat starts Collecting them again.

And so, with all the random information above swirling around in your heads, I close with another quote from one of my books:

“What?” He jerked back and eyed me as if I were a rat liver strewn across his plate. Wait, no, what was wrong with me? Rat livers were pleasant things, and Pyper was looking at me as if I were a particularly noxious poop ball that needed to be buried deep.

– from About That Happy Ending

And so, until next time, I bid you adieu.