Okay, so I’m worth crap-all right now, because like anyone else who has a full-time day job that whips the frigging CRAP out of you while you’re trying to do something called ‘feeding myself and any other poor sucker that’s dependent on me to survive’ while also doing something called writing (or painting, or whatever your dream is in addition to the day job) while also trying to keep up with normal life things like the rest of the human race does, sometimes I just hit that point where I can’t keep up with anything at all.

Place is an absolute mess. Tomato plant growing out of the hole in the sink. Toilet flushing handle’s been broken since September. Plastic funnels in my slippers, my ponytail holders in the cat-food bowls, stuffed dead-rat simulation toys floating in their water bowl. Cats behaving oddly.

I am no longer the cat you once knew…

And me walking around bleary-eyed and noting with a shred of pity that the poor plant by the fridge is just roots in a clay pot now – not much more dirt left, but the dang thing keeps on and I’m like, “Sorry, dude, that you only have me here to keep you alive, and the cats keep knocking you down and taking your dirt and stuff. I’d really like to give you some more dirt but, you know, that would involve me actually going out and getting it and…”

I have a million things to do, and nothing’s getting done. Don’t have enough work hours. Not getting much writing done. Editing’s taking eff-all long to get through. Heat melts me three seconds out the door. Mirror shows some sneering stranger saying, “You suck! You suck humongous slimy globules!” I look back at the end of the day and I’m like, “Okay, I was running around like a chicken with its head cut off and what in the name of all that crap do I have to show for it?”

The cats know I’m a headless chicken, too. I left out some rinsed-off plastic wrap from some chicken I’d bought the other day and woke up with it stuck to the back of my thigh, and right behind me on the bed, the plastic container the chicken breasts had been in. All fixed up in the night by the cats to package me up nice and neat like raw meat.

They’re plotting against me. I know they are because when I finally got to bed before 4am the other night, I woke to hot and heavy purring right in my ear and pinpricks of pain as claws kneaded the back of my head.

“Sep…” Then I realized he was tenderizing the hard meat of my scalp, getting me ready for the packaging. I took refuge under the blanket.

And so I’m sleep-deprived and I fall asleep at work and I fall asleep while writing and I fall asleep sometimes after cleaning the cat litter when I just slump back on the parquets and have no energy to get up and the cats all gather round me like, “What’s the weird human up to now? Let’s lay in front of her mouth so she can’t breathe. She doesn’t need air, right?” 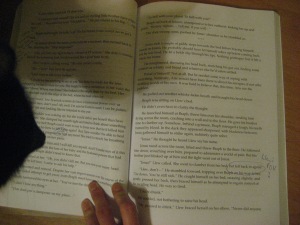 I’m still watching you. Tremble at my shadow…

And I know I’m failing, right? I can see it. See everything I’m not getting done, and I’m sure lots of people are like this – and I know I’m getting something done, right? But no matter how much I squint and how much I scrutinize and now matter how close I peer, all I can see is this measly peasly pile of – what the heck is that? – that I’ve done and then this whole big looming mountain called my To Do List towering over me cackling and pointing and saying “You think that’s getting something done? Ha ha ha, let me squish you now, you little buggy human, and show you how much you’re behind!”

Anyway, so that’s how I feel. And then others around me seem to see this, I don’t know, this amazingly put-together and boundlessly optimistic and energetic person who gets sooo much done and I’m like, how am I deceiving all these people?

But you know what – yes, I’m talking to all of you other people who feel like you’re not getting enough done as you want to or need to or even have to – I have to remind myself that somehow we’re all doing it, somehow we haven’t failed just yet. We drag our tired butts out of bed and we make it through the day and – hey! sometimes we even have a darn fun time of it, too, right? – and I don’t know how you mothers do it, but I guess all of us just have to take on that next task, and then the next, and the next, one thing at a time (or sometimes more), and little by little we make progress and just keep plodding on and on and freaking ON until we finally come through whatever we need to get done.

Eventually we’ll get there… if we don’t let the cats package us up. And if we don’t give up. Right? Right!

And what’s even better is my friend Rebekah wrote an awesome blog post about enjoying the journey, not the goals that’s well worth reading, so maybe we should all just stop feeling worthless for the things we haven’t done yet, chuck the undone items (at least every now and then), and slow down to enjoy the view and the loveliness of the awesome moment we’re in right now :o)

Anyway, on my what-have-I-been-doing-besides-working-eating-sleeping-keeping-the-cats-alive-shopping-beta-reading-writers-group-stuff-and-other-stuff list is I’ve been planning a joint book launch with a fantastic artist and fellow writer Michael Pockley! It’s this Saturday June 14th for anyone interested. 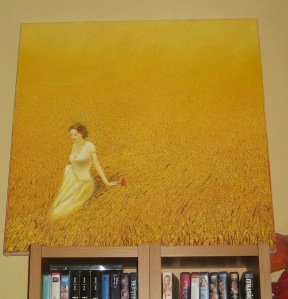 One of Michael’s paintings that I bought!

As to my book Heiress of Magic, it’s sort of officially for sale, but only because I had to publish it in order to order twenty copies for the book launch. So there are still some typos and stuff needing to be fixed and I’m trying to keep it a bit low-key for now.

And I have proof of the goats! (But you may have to click on the picture to see the circle I drew around them)

The goats have been spotted.

And in case you’re interested, here is the beginning of what I’m currently editing, Heiress of Shadow:

Blue hell, Velissi, where are you?

Papa! Velissi streaked through the forest, panting. Branches crunched under her paws. Trees whipped past in a blur. Other weirs ran alongside her, breathing hard, fleeing for their lives.

Papa was there, somewhere in the darkness. And Iven.

Gray streaked past the corner of her vision. She whipped around, fangs bared, jaws snapping – empty air.

Taloned fingers grabbed her shanks and dug into her sleek black fur, sharp nails pricking her skin. Terror lanced through her – and fury. She growled and twisted and snarled. Claws wound her tail around a merciless fist; yanked her into the air. She yelped, her jaws snapping at muscular gray arms. A hard hand clamped over her jaws, forcing them shut.

A muted howl escaped her, fading to a helpless whine. Papa! Iven…

Her captor’s muscles coiled and tensed; she writhed and struggled.

He leapt straight into the eye of the portal.

Instinctive terror drove her into a death-like stasis; her muscles went limp, tossing her body up against her foe’s chest. Sparks and magic sheared through her, then she landed hard on cracked, barren ground. Talons pinned her down. Violet-gray clouds stormed above her, stabbed by jagged spears of lightning.

Velissi whimpered and thrashed, her yellow panther eyes rolling in fear at the creature straddling her shoulders. Long black hair trailed over his bare chest nearly to his waist. Vivid blue eyes glowing like licks of sapphire flame watched her.

But not the shadow-hungry she knew. Those had mindless eyes and seeking green veins that snaked from their skin and could delve into a man and destroy him while leaving him horrifyingly alive. This one had intelligence in his eyes, eagerness pulling his dark lips back from pointed teeth.

He flattened his claw over her ribcage. Something like liquid pain pierced her flesh and flowed through her, icy and sharp and filling her veins like foreign blood. It flowed into her heart, then burst outward in a thousand spiking agonies.

Her organs wrenched and reformed, forcibly transforming her back into her human form, seizing her bones and stretching them out unprepared, smashing her organs and then bloating them. The shadow-hungry’s hold barely let up, even after she sagged under him, depleted, a young, naked woman with tangled brown curls cushioning her head and sweat plastering tendrils to her temples.

In human form, she had nothing to fight with. No fangs, no claws.

She was weaponless. Subdued.

The shadow-hungry climbed to his feet, then hefted her drained body up and slung it over his shoulder. Her head and her arms flopped against his back. Tears leaked from her eyes and dripped over her forehead, trickling into her hairline.

But they could not touch her now.